ItalGreen / News / Corporate / Panoramic padel court: what it is and how to build it
Condividi su

Panoramic padel court: what it is and how to build it

What is meant by a panoramic padel court? How is it constructed? In this article we find out all its features, advantages and Italgreen's offer.

In this article we look at:

What is a panoramic padel court

A panoramic padel court is a special type of court in which the central carriers of the back windows are replaced with smaller plexiglass or steel hooks that allow for a greater extension of the windows and thus a broadening of the game view.

The elimination of poles typical of traditional fields, in fact, makes the game performance even more engaging, precisely because of the absence of obstacles that can limit the view.

This feature makes the playing area much brighter and wider, allowing spectators to enjoy an even more engaging performance.

This is why, at major tournaments or competitions, panoramic padel courts have become favored over traditional ones.

The advantages of a panoramic padel court

In addition to the ability to enjoy the games to the fullest, a panoramic padel court also has other advantages, for example:

How to build a panoramic padel court

The main difference in the construction of panoramic courts from more traditional ones is the replacement of the "classic" poles on the short side with practical "connectors" between one window and the other.

These elements are very small and can be made of steel or plexiglass, materials that allow a greater view of the game.

Thus, by replacing the poles with these connectors, it is possible to obtain equally solid and quality courts, meanwhile improving both the playing conditions of the athletes and the view of the spectators.

Do you want to know more about building a panoramic padel court?

In fact, the Extreme Panoramic steel court is characterized by an innovative process of hot-dip galvanizing and thermo-hardened powder coating.

Thanks to this special processing, the field is extremely strong and durable, thus nullifying the risk of any structural failure.

This particular product is also characterized by the absence of corner posts, thus giving an even wider and more complete view of the game. 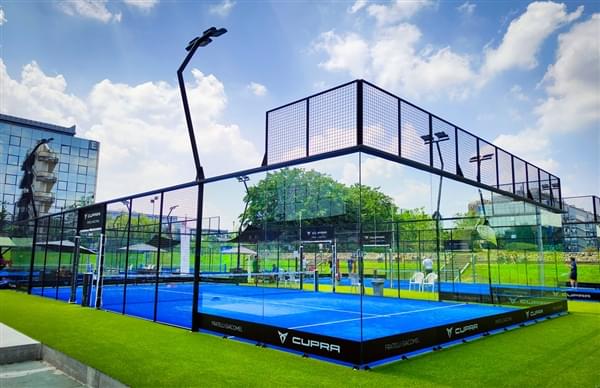 Do you want to install your own panoramic padel court?