FC Boavista renews and intensifies its partnership with Italgreen

Professionalism and foresight are the two keywords of the operation recently concluded by Italgreen in Iberian lands. The company, a leading manufacturer and installer of synthetic turf mantles for sports, has been widening its own horizons for a long time, beyond Italy's frontiers, creating collaboration relations, partnerships and supplies with the most important teams and sports stadiums in the world.

The latest operation Italgreen has concluded was carried out at the Bessa Stadium in Portugal, home of the domestic matches of FC Boavista, recently admitted to the Primeira Liga (the Portuguese A Series), and ready to host top-level teams, such as Benfica and Porto. Italgreen was the first company to conclude an important partnership agreement with the Boavista, resulting in a substantial intervention of maintenance of the stadium, built in 2009 by Italgreen. Five years later, Italgreen once again confirms its technological and innovative skills, concluding the works to remake the mantle. Today it employs the best technologies available, making the play field even more natural thanks to its revolutionary composition with GEOFILL®, the first natural infill for synthetic turf mantles.

With its organic granules, consisting mostly of plant fibres and mineral elements, GEOFILL® is an ecological alternative to traditional rubber systems. These are plant fibres resistant to ageing and exposure to weather, natural anti-freezing and with components that prevent infesting grass from sprouting, a substrate that does not produce mud even in the worst weather conditions. The result is a field approved with 2 stars by Fifa, perfectly drained, devoid of the risk of lesions, which guarantees fluid ball sliding and passing, against all possible wear factors.

“Being near teams of this calibre, such as FC Boavista, makes us very proud,”

“Five years after our project with the Bessa Stadium, we concluded a redevelopment project that highlights how our clients trust our work and our Italian product, as well as the quality of what we install. Our products are strictly tested by the world's main laboratories and have officially entered Italian professional football, with excellent feedback from players, coaches and physical therapists. After installing the first synthetic turf stadium for the A Series with the “Piola” club of Novara, Italgreen also conquers Portugal, in its Primeira Liga, with the Bessa Stadium of Porto, proving its position as leader in time and space.” 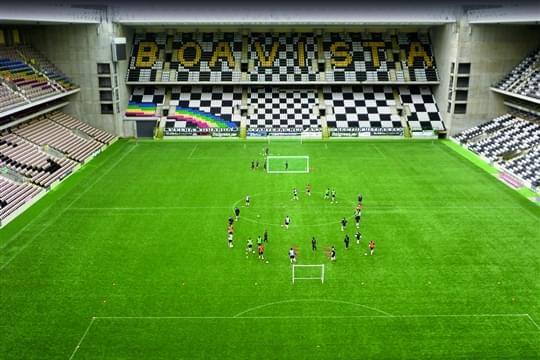